Engine oil is not complicated but is very very important. First of all you can run an engine on just about any type of oil for a little while and the wrong oil is much much more better that no oil. A car can drive maybe 20 miles without coolant or antifreeze before it will overheat and stop. But when it comes to no engine oil, a vehicle would not be able to leave the parking lot. Lubrication is key, so the better the oil the better lubricated the important engine parts are. So how do you know if you have the correct engine oil? Check your owners manual.

Some oil change places seem to always want to change the type of oil you use, is it because they only have one kind of oil or it there a more sinister reason? Asian designed vehicles or engine have used thinner oil from the onset. In fact I remember watching the TV show Bah Bah Black-sheep when I was a child. It was funny that the American GI mechanics ran out of oil, and the good old black sheep went and stole some oil from the Japanese. Way way back then the American mechanics complained about the oil being too thin. Funny stuff!

Yes, do not play games with your engine oil or try to trick the system. Mazda and Honda like to use 5w20 and Toyota and the rest seem to always like 5w30. Around 2012 most Japanese manufacturers switched to 0w20 full synthetic. It is important to note, that the manufactures did not increase their oil change interval when they went to synthetic. 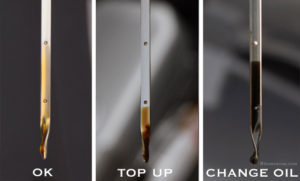 German automakers started to switch to full synthetic motor oils back in the late 1990’s. At this time Mercedes Benz, and BMW extended their oil change intervals from 5,000 miles to every 12,000 miles. Please note that the German automakers use a heavier 5w40 oil and have a much larger oil capacity, meaning a Mercedes could hold up to 8 liters of oil, when your Toyota only holds 4 or 5 liters. It is also important to note that the Germans engines have a different type of oil filtering system. But even with almost 20 years of motor oil history and improvements, the German vehicles are not dropping back their oil change intervals to around every 8,000 miles.